We knew that Telltale was taking this year off from a full season of The Walking Dead  but still was ready to please fans of the series with something smaller akin to 2013’s bridging chapter. 400 Days. Today they’ve finally announced with that something is and fans of The Walking Dead from either the long-running comic series, the AMC TV series or both are sure to be excited. The Walking Dead: Michonne is coming this fall and will be a three part mini-series where the fan favorite character from both the TV and comic series will intersect with Telltale’s series of games. Here’s the first piece of art featuring Michonne Telltale-ified: 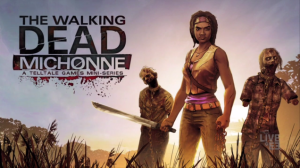