2005’s Fantastic Four was a decent action brawler inspired by a movie that was pretty average to mediocre depending on who you ask. In 2007, both the film and video game received a sequel in Fantastic Four: Rise of the Silver Surfer with the movie sticking at Fox Studios while the game property changed hands from Activision and Seven Studios to 2K Games and Visual Concepts. With the power of the then new Xbox 360 backing it, ROSS had the opportunity to build upon the foundation of the first Fantastic Four, which was not a bad starting point in my opinion. Unfortunately even with more powerful hardware behind it, ROSS is a reminder why we should be happy that no one makes movie games anymore.

Similar to how the first Fantastic Four movie game retold the plot of the movie and expanded upon it with a few sub-plots, so too does ROSS, but whereas it was easy to understand Activision’s Fantastic Four if you didn’t see the movie, the ROSS film is a required appendix to understanding the game. In the first level of the game the four talk about the Silver Surfer causing anomalies around the world before he’s even seen at all in the game and Sue gets upset about their mission disrupting their wedding plans, something also touched on in the film but only briefly discussed here. The movie did a poor job of handling the character of Galactus, only showing a vague outline of the planet devourer in a cloud, but here you don’t even see the cloud, even though you see TWO of his heralds: The titular Silver Surfer, as well as Terrax. This is further compounded by the fact that the game’s story was penned by Flint Dille, a writer who helped craft the story of The Chronicles of Riddick: Escape from Butcher Bay, an example of how good movie games can be.

Fantastic Four had some really shoddy cut-scenes that looked out-of-place with the games otherwise good graphics. This is one of the few areas where ROSS trumps its prequel as the team when presented in FMV’s look like their in-game counterparts. This comes at an expense though as it loses the cast of the film, though the soundalikes hired for the game do a pretty decent job and have good chemistry. While the story is incoherent unless you’ve seen the film, the Four have some banter that made me laugh on more than one occasion. 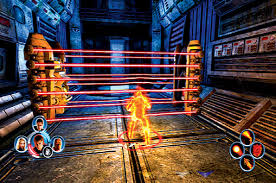 Despite a change in both developer and publisher, anyone who played the first Fantastic Four movie game shouldn’t have any trouble picking up ROSS, which is to say it’s a glorified brawler where you crawl through dungeon like environments beating on bad guys, occasionally stopping to hit a button to open a door or activate an elevator. The first movie game only allowed two-players at a time and reserved having the full team together for bosses, but in ROSS you can not only have up to four players at a time, but also switch easily between any team member you want at any given time. This would be a great feature if you could A) convince someone else to play this with you or B) actually needed to switch from anyone other than The Thing, which you won’t need to do.

This game has a similar set up to the first game where each of the team has powers that can be leveled up along with base stats like attack, defense and how quickly they can regenerate their special move meter, but I easily got through the game using one character: The Thing, and spamming one move: Shockwave Punch, over and over. This game is a brawler at its core which is a pretty repetitive type of game, and I know I’m repeating myself, but in the previous game there was a least some skill in learning the additional combos as some were effective against certain types of enemies, but that’s far from the case here. Trust me: Stick with leveling up The Thing, and keep with the one move and I promise you’ll be safe, in most circumstances.

Every now and then the game will try to break up the repetition by focusing a stage or two on one team member: The Human Torch has some incredibly boring flying missions where you basically just have to move out-of-the-way of obstacles and a boost button every so often to keep pace. Mr. Fantastic gets the least amount of attention in a level where he has to slink through some lasers, and the worst offender is Sue Storm, but this depends on how you play the game.

In the early stages it teaches you that Sue can sneak past enemies by using her powers but after that point, the game never really requires you to exercise this skill until very, very late in the game, so when it came to spending previous upgrade points, I did so exclusively on The Thing for upclose fighting and the Human Torch for his ranged attacks. This however, turned into a bit of a headache in the end of the game where you’re forced to go into a heavily stealth focused mission with the Invisible Woman that can be pretty tricky if you haven’t increased her invisibility skill, which it was for me as I didn’t, because up until that point, it was a waste of points.

The game touts its “Fusion System” where you can hold the left trigger with whatever character you’re using and hit a corresponding face button to perform a move with another member of the team, but these moves are never as effective as what each team member already has, or for that matter, The Thing’s Shockwave Punch. I played this game completely by myself, and perhaps the Fusion moves are beneficial when playing with more than one person, but somehow I highly doubt it.

Like other comic book movie games, the plot is filled with other villains that you’ll fight as bosses outside with the only returning villain being Doctor Doom. You’ll fight the Super Skrull, who is not as super as his namesake, and Terrax who will go down as one of the worst boss fights ever as you have to complete tedious light bending puzzles during a boss fight. Light manipulation puzzles are bad enough and played out on their own, but they’re even worse when thrown in with a boss to topple.

Fantastic Four (2005) was a pretty short game, as most movie games are, but it had enough replay incentive to convince you to run through the game at least one more time. ROSS is an even shorter game that I completed in a few short burst sessions in a little under a day, and outside of collecting a few easy achievements, there’s little reason to go back for seconds. The action is boring, the game is easy and it does a terrible job of encouraging teamwork or experimenting with other characters outside of one. There was enough good stuff in the first FF movie game to offer a mild recommendation, but they should have left Galactus devour this one.

One thought on “REVIEW: FANTASTIC FOUR: RISE OF THE SILVER SURFER (XBOX 360)”