Disney Infinity is a lot of different things to a lot of different people. Some enjoy the freedom of creating their own play sets and playing the creations of others, while others prefer a more traditionally structured video game experience found in the game’s play set offerings. If you read my review of either the Disney Infinity 2.0 starter pack last year, as well as the subsequent reviews of both the Spider-Man and Guardians of the Galaxy play sets, you’ll know I’m firmly in the second camp. Unlike a lot of the world, I haven’t really caught the Star Wars bug, so while I’ve heard great things about this year’s version of Disney Infinity and I love the design of the figures, I don’t have the same level of excitement that I got last year when they added Marvel characters to the toys-to-life juggernaut. With a Marvel play set not set for release until 2016, it was much easier for me to pass on Disney Infinity 3.0, that was until the release of two toy box expansion games that were released this month: Toy Box Speedway and Toy Box Takeover.

For those unfamiliar with the Disney Infinity expansion games, they games that aren’t quite campaigns yet are much more structured than the toy box. Last year’s Disney Infinity 2.0 came with two out of the box: A Diablo-esque dungeon crawler titled Escape from the Klyn as well as a tower defence hybrid game Asgard Tower Defence. This year’s version of Disney Infinity continues the trend of reducing content that comes in the starter pack: 1.0 came with three figures and three play sets, 2.0 came with three figures, a play set as well as two expansion games while 3.0 has two figures and one play set. The games I’m talking about today are each sold at a cost of $19.99 each which seems a little high when two of these games came with 2.0 last year seemingly for free, however this year’s offerings offer a much more meatier experience than either of 2.0’s games which I didn’t even bother to finish.

I’m going to talk about each game separately within this review, but before I get into them, I wanted to explain how you can go about playing these games, more specifically I’m going to break down cost. If you bought the Disney Infinity 3.0 starter pack, you can buy each game for $19.99 each. If you didn’t buy the 3.0 starter pack but have the base from a previous version, you can buy the base Disney Infinity 3.0  game from your store of choice, in my case the PlayStation Network, at a cost of $19.99. Before purchasing the game digitally, you may want to look into seeing if the base you have is compatible with your hardware. Microsoft base’s only work with their applicable hardware, so if you have a base for the Xbox 360 from either 1.0 or 2.0, they will work with with the Xbox 360 but not the Xbox One. If you had a PS3 and upgraded to the PS4, your base will still work, and Wii U owners can use their 1.0 bases for all versions of Disney Infinity on that platform.

Of the two expansion games, this is easily the first you should pick up and easily more recomendable than Takeover. Speedway can best be described as Mario Kart meets Disney Infinity. You can use any figure from either 1, 2 or 3.0 as well as any car or motorcycle power disc from any version of the game, as an example I played as Spider-Man driving Nick Fury’s flying car. There’s a small open portion where you can drive around and get a feel for the game’s driving physics and perform tricks, but the most fun you’ll get out of Speedway is in the game’s three main modes: Racing, battle mode and time trials.

The first is like Mario Kart if you subtracted weapons, the second adds the weapons back in while the third, you guessed it, is just a way for you to practise a track and try to beat your best personal time. Whether playing in race or battle mode, you’ll have three different cups made up of three different tracks for a total of nine courses in all, themed after properties like Star Wars, Frozen, Guardians of the Galaxy, Gravity Falls and Wreck if Ralph among others. In time trial you can simple pick whatever course you want.

The tracks themselves are great, and not only was a lot of attention but into making them faithful to the property in which they were adapted from, but into how they play as well. There’s lots of secret short cuts to uncover, and the courses themselves change throughout the various laps of a race, making you change up your tactics as you get deeper into a race. In the Nightmare Before Christmas track for example, a series of saw blades will start up in lap three that weren’t active at all in the first lap.

The driving physics can take some getting used to, especially if you’ve only ever grown up playing Mario Kart, but once you get used to them, they click and in my case, I can’t see myself being comfortable playing Nintendo’s big franchise in the future. Gas and brake are on the R2 and L2 triggers respectively, and holding L2 into a turn will put you into a power slide that you can use to build up a boost meter for extra speed. If it all sounds familiar, it’s because it is, but the mechanics feel familiar enough while still feeling unique to this game. 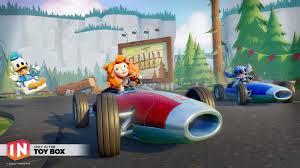 If there’s any complaints I can lodge against Speedway, is that in the case of the battle mode, there’s no instruction given on how to not only fire your weapon, but in what each weapon does. I eventually figured out how to shoot by process of elimination, but I still never really knew what I was picking up whenever I got an item. A second complaint I have is that like the Disney Infinity play sets, I wish there was more game. At $19.99 there’s about enough content for that price point, but I was having so much fun in Speedway that I wish there was more. Should they decide to release a stand alone Disney Infinity kart racing game with the amount of content found in a major Mario Kart release, I’d but it day one.

Whereas Speedway felt unique to Disney Infinity 3.0, Toy Box Takeover feels a lot less special, mainly because it feels like a much more expanded upon version of Escape from the Klyn from 2.0. It too is a dungeon crawling action game, albeit with a lot more enemy and environment variety. In Takeover, Syndrome has stolen the wand used to make toy box creations and its up to you to get it back. In order to do this, you’re tasked with going into different worlds based on Star Wars, The Incredible, The Lone Ranger and Pirates of the Caribbean and collecting treasures that will allow you to reach Syndrome and reclaim the wand.

A problem I had with Escape from the Klyn is that is just got boring going through the same environment over and over again beating on the same few enemies. In bringing in different worlds, some of which have bosses like Darth Vader and Green Goblin, it makes it much more interesting to perform the simple task of beating on bad guys and hunting down loot. Whatever figure you’re using won’t equip any new weapons or armour, that is left to your side kick character, a concept carried over from Escape from the Klyn. Loot comes in one of three types: food, which increases your side kick’s base stats; Armour that grants new abilities; Weapons and new side kick’s, each themed after popular Disney properties. It’s easy enough to understand and not terribly advanced for an older player, but the prospect of new loot always pushed me to explore for out of the way treasure boxes.

Compared to Speedway, I didn’t find myself liking Takeover that much. It’s a great way to level up your figures, especially with Marvel Battlegrounds coming out next year, but even with the different worlds and bad guys, the gameplay is a little too repetitive and not as replayable. On the medium difficulty Takeover felt a little too easy but on hard things felt just right. I tried to play on the extreme difficulty for added experience, but even with characters around level 13-15, I found myself dying a little bit too much. 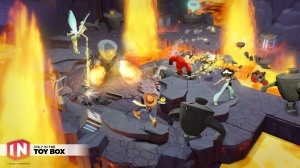 If you can only buy one of the 3.0 toy box expansion games, Speedway is easily the best choice as it’s simply more fun, has a lot more replay value, and is a great game to pick up and play with a friend. If cart racing isn’t your thing, you may get a lot more enjoyment out of Takeover, but from someone who enjoys each of the genres about equally, my investment in Speedway felt much better. If you’re a huge fan of Disney Infinity you probably will get a lot of enjoyment out of each of the games, but for my money, Speedway is the way to go.