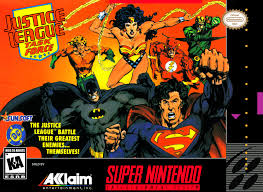 Before the X-Men squared off against one another, or the Marvel Universe went to war with Capcom, the heroes and villains of the DC Universe fought one-on-one in what would become a trend for super hero in video games: put them in a fighting game. Given the huge popularity both at home and in the arcade of games like Capcom’s Street Fighter II and Midway’s Mortal Kombat series, everyone was trying to get in on a piece of the fighting game pie: Konami crafted a Teenage Mutant Ninja Turtles game in Tournament Fighters, Bandai and Sega would go on to do the same for the Mighty Morphin Power Rangers, and who could forget Shaq-Fu?  As history would go on to tell us, super hero fighting games eventually became big business, going on to show up in the most prestigious tournaments and for an initial entry, Justice League Task Force is a respectable brawler. However unlike Marvel’s first foray into the arena, it hasn’t really aged particularly well.

When Darkseid and the forces of Apokolips invade earth and attack a missile silo, the heroes of the Justice League must band together or else let Earth suffer the same fate as Apokolips. When the members of the League start attacking one another, it appears there may be more to Darkseid’s plans than originally imagined. I always enjoyed fighting games that tried to implement any form of story, as they brought context to the fights and gave them meaning, also I tended to play these games by myself. This is why I was in camp Mortal Kombat in the 90’s and not Street Fighter, as I cared more about the plot and character motivations, bizarre as they were. Justice League Task Force is no Mortal Kombat, and it’s attempt at story is very flimsy with  coming up with a reason as to why Batman would be fighting Superman, or Green Arrow would be firing arrows at The Flash and frankly I’m not even sure if it needed one. 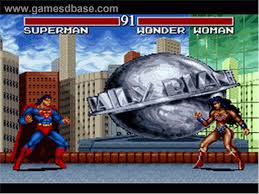 Worse still no matter what character you play with, the story is exactly the same. The order of fights may be different, but you’ll fight against the other five Justice League members, two bad guys, a clone of yourself, and eventually Darkseid. Characters don’t even have their own special ending, nor can you play as any of the three villain characters to get a different perspective of the conflict. You can’t always play a fighting game with a friend or sibling, and what made you try other fighters was the reward of seeing their character specific endings, especially in the case of Mortal Kombat. That incentive is lost in Justice League Task Force. There is a separate single-player mode, Battle, where you can use the villains and skip the story, and perhaps this should have been the sole mode for those not playing against someone.

Like a lot of 2-D fighters in the 16-bit era, Justice League Task Force is a shameless Street Fighter II clone, down to the three kick, three punch, low, medium and high button layout. If you’re going to rip-off someone, you might as well do it from the best, and as far as Street Fighter-lite fighting games go, Task Force isn’t all that bad. The roster of heroes and villains is small: nine total, composed of six Justice League members and three villain characters, Darkseid, Despero and Cheetah, yet each play and feel like you think they should. Superman, my favourite character, has all of his signature abilities like flight, freeze and heat breath, and his throw when he grabs someone and punches them to the other side of the screen both looks and feels exactly how it should. Another favourite fighter of mine is Wonder Woman, who can use her lasso to pull people in for hits and reflect projectile attacks with her bracelets.

The issue with Justice League Task Force, and it’s a huge one, is that pulling off said special moves is very unreliable. A game like this is made or broken on the responsiveness of its controls, and it’s too difficult and unreliable to pull off moves in the heat of battle. This is also because of the complicated inputs of most of the moves in the game. It was easy to do fireballs, slide kicks, upper cuts and the like in other 16-bit fighters because for the most part, they were pulled off mostly with simple charge, quarter circle, or quickly moving back to forth inputs. Nearly all of the moves in Justice League Task Force are a combination of a punch or a kick and either a half-circle motion either forwards or backwards which never seem to work, that is unless you’re the game’s AI. Unless you’re playing at either the two or one star difficulty, you better get used to seeing the “Continue” screen because the computer can pull even the most complicated moves with an unfair amount of accuracy. 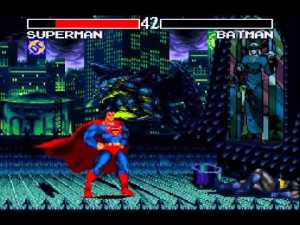 Exactly how the fight would go ; )

Unfortunately graphics don’t make up for a lack of precise control, but if they did, it would make Justice League Task Force a lot more recommendable. The fighters, especially the trinity of Superman, Batman and Wonder Woman, all look and move great, and their respective character arenas are themed appropriately and also look really nice. My favourite is the Gotham City arena with its dark, gothic architecture in the background and accompanying Bat-signal and moody music. I’m looking at this game on the SNES though there is a port on the Sega Genesis which I don’t own. In researching that version, it has a much better stage for The Flash that I wish was in this port. In the SNES game you fight the Scarlet Speedster on a desert highway, however in the Genesis the stage is The Flash Museum which is one hundred percent more character specific and less generic.

For an early entry in the super hero themed fighting game genre, Justice League Task Force isn’t exactly bad, however its poor controls, difficulty in pulling off moves and lackluster story make it more of a curiosity than a must-play title. Though it does sport some nice looking characters and backgrounds, if you’re looking for a DC themed fighting game, you’re better off sticking to Mortal Kombat Vs. DC Universe, or Injustice: Gods Among Us.