There were a lot of X-Men video games released before the first X-Men Legends, some of them pretty great, but none really got the property right like the Legends series. Whereas console limitations had it such that the most X-Men you could have on-screen were two at a time (remember this is years before Konami’s arcade game made it to consoles), X-Men Legends allowed you to build and customize a team of four to battle Magneto and his brotherhood of evil mutants. The first game was a great proof of concept of how a Marvel property could be married to the action-RPG/dungeon crawler genre; X-Men Legends 2: Rise of Apocalypse cemented the formula and produced not only the best X-Men game to be released to date, but laid the building blocks for the Marvel Ultimate Alliance series as well.

After the conclusion of the first game, Rise of Apocalypse starts with a united team of X-Men and Brotherhood members teaming up to save a captured Professor X, who has learned that the first mutant, Apocalypse, has arisen and is forming a new group of horsemen to increase his power and conquer the world. The original game in the series stuck with a very safe “X-Men Vs. Magneto” conflict that was filtered through the eyes of the new mutant, Magma, who was used cleverly to explain the world of the X-Men who may have only known of the world through either animated series, films, or other video games. The threat of Apocalypse escalates the threat level to a global scale, and it makes it feel less like a conflict that is X-Men centric, and more like one that affects the entire world. Needless to say, the word “Apocalypse” is in the title for a reason. 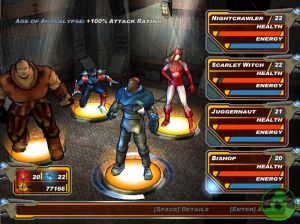 Given that Magneto gets time off as the protagonist this time around, players can not only play as a plethora of returning favourites like Wolverine, Nightcrawler, Cyclops, Storm and Jean Grey, but characters like the Master of Magnetism himself and other villains like the Juggernaut and Sabretooth. On top of all the returning and villain characters, fan favorite Deadpool also shows up as an unlockable character, as does Iron Man if you manage to gather enough collectibles throughout the game. A feature that was only available as a finishing bonus in the first game, the ability to wear classic costumes as opposed to the generic outfits from the Ultimate Universe, is available right off the start. This may sound like a simple thing, but to me Legends 2 would’ve been better for this alone.

X-Men Legends 2: Rise of the Apocalypse carries over the gameplay foundation from the first game with only subtle changes made to the formula. As a team of four, you crawl through dungeon like environments, beating up enemies, collecting and equipping loot and developing whatever team your heart desires however you want to. A character I used through the entire campaign, Storm, can use wind, lightning, and blizzard powers and you can choose to focus on either one of these, or a combination of the three. Certain characters like Magneto can use their powers outside of battle to craft bridges that will allow access to secret and hidden areas much safely than in the first game. In the original Legends if you used Storm for example to fly over a gap, the rest of your team would fall in lemmings style and die on the spot. These sections were often mandatory to the campaign as well, and dictated who you had to take with you on a given mission, which is thankfully not the case with X-Men Legends 2.

Also carrying over from the first Legends title is the cel-shaded art style which a lot of people back then and even know how an issue with, but I frankly really like it to the point where I missed it in both the Marvel Ultimate Alliance games I played again this year. The characters up close lack definition, but as most of the game is played from a birds-eye overhead view, all you really see are the colourful characters in their iconic costumes. Environments also get a lot more variety this time around as you’re not only travelling all over the globe, but X-Men centric places like the jungles of the Savage Land and the island of Genosha with no repeated environments throughout the campaign, which was another problem fixed from X-Men Legends as you went back to the Astral Plane a bit too much for my liking.

Normally I’m not a fan of games post the PSOne that use out of engine cut-scenes to tell story as I feel it takes me out of the experience. Rise of the Apocalypse is a game that does this and it’s one of the rare occasions where I don’t mind it at all. The cut-scenes were created by Blur Studios and even worked on by Tim Miller, who went to to direct a movie that you might have seen this year set in the X-Men universe called Deadpool. Blur is the best in the business when it comes to making incredible CG cut-scenes and Legends 2 is no exception. I replayed X-Men Legends 2: Rise of Apocalypse before writing this piece and was surprised to find that the cinemas in this game have aged very well, which is something that I couldn’t even say about the first Marvel Ultimate Alliance that ran on much better hardware. It certainly doesn’t help that Patrick Stewart once again returns as the voice of Professor Charles Xavier, along with veteran voice actors like Steve Blum who for my money is the best voice of Wolverine ever, and Josh Keaton among many others.

X-Men Legends 2 builds upon the foundation of its predecessor in nearly every way, but there’s still a few points in where it stumbles a little. Part of the fun of a game like this that also helps it from getting a bit repetitive is the collection and hunting of loot. The problem with X-Men Legends 2 is that there’s far too much loot and none of it ever seems that helpful. I can’t count how many times I would have a full inventory and I had to dump everything I had just to pick up another piece of gear, only to find out it was not worth it. This led me towards the end to just ignoring loot and money all together, as I was flush with both.

The AI at times can also get far too aggressive towards whatever character you’re using. I’m not sure if this is an issue when playing multiplayer, but too frequently a character would get trapped and go from full health to dead in seconds while everyone else on my squad was in top shape. These problems don’t break the game though, nor do they drag down an otherwise well crafted game.

X-Men Legends 2: Rise of Apocalypse is not only a better game than the first Legends, but it’s also the best X-Men game that’s ever been made. It combines the mutiplayer, beat-em-up gameplay of Konami’s arcade classic with a great story, terrific production values and the same RPG leveling mechanics that made the first game a hit. With new characters, returning originals, playable villains, and a campaign that will sure to last you upwards of twenty hours, even the few minor problems with X-Men Legends 2 prevent it from being a must play for fans of the X-Men universe.

One thought on “THE BEST MARVEL CONSOLE GAME EVER PART 5: X-MEN LEGENDS 2: RISE OF APOCALYPSE (GAMECUBE)”