As someone who grew up in the NES era, some of the game’s my eyes were immediately drawn to while either when purchasing or renting a game were those purple bordered Capcom ones, especially those with a Disney license attached to them. Nowadays a game based on a beloved Disney property is normally a match three, or free-to-play mobile game now that Disney Infinity is no more, but once upon a time games based on Disney shows and films were the ones you looked forward to getting your hands on. Now thanks to Digital Eclipse, six of those games have been lovingly remastered in a collection that most, including myself, never thought would ever exist in the Disney Afternoon Collection. Whether you grew up with these games, always wanted to play them or never even heard of them, the six games that make up the Disney Afternoon Collection are well worth the low asking price and deserves as much support as possible to show to all publishers that games like these need, nay deserved, to be preserved; Especially when it’s done with as much passion as it’s done here.

The Disney Afternoon Collection collects six classic Disney NES games: DuckTales, DuckTales 2, Chip ‘N’ Dale Rescue Rangers, Chip ‘N’ Dale Rescue Rangers 2, Darkwing Duck and TaleSpin. Outside of TaleSpin which is a scrolling flight-shooter with a mechanic where you can flip your aircraft and go backwards through a stage, the other five are tight, beautiful 2-D side-scrolling plat-formers with their own unique hook. DuckTales and its sequel for example are hop-n-bop affairs with the hook that you have to kill enemies by bouncing on them with a pogo stick, the Rescue Rangers franchise stars two characters that are chipmunks and thus the levels reflect their size and the duo uses boxes in the environment as projectiles and Darkwing Duck can be described as Mega Man lite. 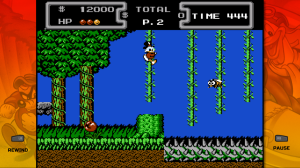 While some games are better than others: DuckTales and the first Rescue Rangers are terrific, their sequels are merely good, Darkwing Duck is hard for all the wrong reasons and TaleSpin has its large share of haters, all are very much worth playing. Even if you’re not a Disney fan, or you are but grew up well past when these shows were off the air, the tight controls, crisp colorful graphics and soundtracks of all these games help them all above being mere licensed games. Fan of the critically and commercially successful indie darling Shovel Knight? Two of the games in which it more than likely got its pogo mechanic are recreated here in the DuckTales games. From a pure dollars and cents perspective, it’s much cheaper to obtain this collection than the several hundred-dollar asking price of at least two of the games in this collection alone. As someone who played the first DuckTales and Rescue Rangers for hours but never their sequels, the Disney Afternoon Collection was worth it for those two games alone.

The tech behind the Disney Afternoon Collection is the same that powered Digital Eclipse’s Mega Man Anniversary Collection from 2015, meaning this is as close as anyone’s going to come to playing these games without having to track down a CRT TV, an NES and six carts. There’s several display options, from wide to full screen and even the option to add scan lines to bring back that retro TV feel. All can be used based on your personal preference without negatively affecting how any of the games feel. Like Mega Man, you can save whenever you want so you don’t have to finish all of the titles in one sitting like we had to do back in the old days, and an added rewind feature wherein you can recover from a death or mistake with a simple press of a trigger. This makes the Disney Afternoon Collection accessible to both new comers and even those who maybe loved any one of these games once upon a time but found themselves getting stuck. For the harder titles in the package, like TaleSpin and Darkwing Duck, this is a blessing.

When you’re done with each of the games, the addition of boss rush and time attack modes complete with leaderboards is a great way to add playtime to these admittedly short games. I’ve never been one for either of these modes in games in the past, even in the Mega Man Legacy Collection and I’ve loved that franchise since its inception,  but they’re a lot of fun here to do the fast paced nature of each title, in particular the boss rush mode. Once you get the pattern down to the bosses in a few of these games, you can beat them in mere minutes and it makes competing in the leaderboards here perhaps the most accessible than a lot of other retro compilations due to the low time commitment. Doing both time attack and boss rush will net you some pretty easy trophies/achievements if you’re into that sort of thing, but it comes with the caveat that the rewind feature is turned off so you better practice before committing to either. For anyone who loves series like Did You Know Gaming on YouTube and are really into the history of games, the bonuses found within the Disney Afternoon Collection almost make the games you get mere extras to the special features. There’s plenty of concept art, packaging and design documents to thumb through, even scans of the ads for these games that used to appear in magazines and comic books. 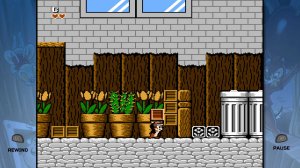 I never thought I would see the day when games like DuckTales and Rescue Rangers would be brought back for both new and nostalgic gamers, and for that, Digital Eclipse deserves a standing ovation. While not all the games in the Disney Afternoon Collection are classics like DuckTales or Rescue Rangers, all are a lot of fun and deserved to be remembered and preserved in such a well put together package as this one. Between this and the Mega Man Legacy Collection, I can’t wait to see what DE is going to spring on us next. About the only thing I can say negatively about this package as I wish there was a physical copy being sold, and should they choose to do one like they did with Mega Man, I’ll gladly rebuy this wonderful compilation in a heartbeat.