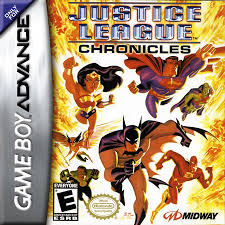 After playing through Justice League: Injustice for All on the Game Boy Advance, I can’t say I was looking forward to playing through a second GBA game from Midway, and one that was turned around in about a year no less. Perhaps it was a case of going with in low expectations because of how bad the Justice League’s debut outing was on the Game Boy Advance, but I found the follow-up title, Justice League: Chronicles, to be a pleasant surprise. While Chronicles is little more than an average brawler, and a short one at that, the way it manages to recreate the feel of the Justice League animated series within the limitations of the GBA is pretty impressive and very much worth seeking out for both fans of the show and the Justice League property.

Justice League: Chronicles doesn’t have a single thru line narrative, but instead is broken up into three episodes each made up a few levels that take place in vastly different environments and can be played in any order you wish. There’s “Dark Winter” which has the Flash and Green Lantern investigating an anomaly in the Arctic; “Trial in Ape City” where Batman and Hawkgirl must find evidence to exonerate the rest of the Justice League who are framed for a crime they didn’t commit by Gorilla Grodd and finally “Savage Time” which is based on the episode of the same name and features Superman and Wonder Woman travelling back in time to the second World War to prevent Vandal Savage from rewriting history when he supplies the Axis powers with weapons from the future.

The way in which Justice League: Chronicles story is structured makes it feel very much like the pre-Unlimited Justice League show where there was less of an overarching narrative and more one-and-done, or two-and-done, as stories were usually two-parters. Episodes typically tended to not feature the entire team and focus on a few members at a time, which is something that Chronicles does as well, mostly because the Game Boy Advance couldn’t possibly handle having all seven members of the team playable at all times. It makes sense whether intentionally or not as a product of the Justice League animated series to have the characters exist in the teams that they do. As there’s seven members of the team and only three episodes each with a team of two, this means that Martian Manhunter sits out the main campaign as a playable character, however there is a score attack mode where you can play through all episodes with whatever team you wish, including J’onn J’onzz. The story itself is told via brief cut-scenes that feature still pieces of art that capture the style of the show and are far more pleasant to look at than the talking heads and walls of text from Injustice from All.

Whereas Injustice for All was a side-scrolling action plat-former, Chronicles is a more traditional beat-em-up and a good feeling one at that. Played from an overhead perspective, something not normally typical of the genre, it feels good to punch waves of sentient apes and Nazi’s as each of the members of the Justice League and the perspective never gets in the way of the action. Each member of the seven strong team has access to two unique powers that can be cycled between with the R-trigger and activated with the L-trigger like Superman’s frost breath and heat vision or Batman’s batarangs and smoke bombs. Most enemies can be taken out with just your basic attack, however getting to know your team’s special abilities greatly helps in dealing with some tougher stage enemies as well as the few bosses you come across. There’s some lite plat-forming and it can be cumbersome as reading the environment can be somewhat difficult and jump and attack are switched, but there’s no life-or-death jumps and about the most you’ll have to do is jump to some higher ground to destroy a switch or collect a health power-up.

It wouldn’t be a brawler without an elevator.

Justice League: Chronicles is an easy game to pick-up-and-play, and about the only minor control issues is that the League tends to move a little too fast, and that’s not just the Flash, but everyone. It makes it a little difficult to line up hits a few times, but it never becomes frustrating and in boss fights like the one with Killer Frost in “Dark Winter” where you have to move between close projectiles, the controls won’t get you killed or lead to cheap deaths. Chronicles dabbles with some simple puzzles that require team work like Green Lantern needing to use his power ring to block off an energy barrier so the Flash can destroy its source such that they both can proceed, but this is about the only instance where something like this comes up. Justice League: Chronicles is a pretty short game, only talking maybe an hour or two to fully complete, and also not that challenging, and having alternate paths that you could discover that could only be accessed in situations like this could have helped elevate this even a little bit in the pretty basic genre it’s in.

To break up the brawler gameplay, each “episode” of Justice League: Chronicles has a pseudo-3-D segment that are well-meaning, but go on a bit too long. Two can best be likened to the opening level of Super Return of the Jedi where you have to drive to Jabba’s palace in a speeder, avoiding obstacles and leaping over pits. “Dark Winter” has Flash in this role as he races to the horizon while another has Batman attached to a grapnel line running up the side of a building in “Trial in Ape City”. The latter one doesn’t really make sense contextually as he tells Hawkgirl to secure a building while he scales to top. Last I checked Hawkgirl could fly, Batman. The Flash section can be frustrating as you often can’t react fast enough to move out-of-the-way of a moving enemy which can hit you and then cheaply knock you into a pit, forcing you to start over should your lives run out but this isn’t really the case with Batman’s thankfully.

“Savage Time” is unique in that instead of being an endless runner, it’s a 3-D shooter where as Superman you have to manoeuver around and shoot enemies with your heat vision. This is made artificially challenging in that Superman can only shoot straight ahead, meaning you have to often put yourself in the line of fire in order to hit enemies and there’s no cross hair to speak of to help you line up your shots. Superman’s 3-D portion does end in a pretty spectacular fight with a giant blimp that you have to assault on multiple sides, so while it’s less functional than either Flash of Batman’s 3-D stage, it has a much better payoff.

When not in 3-D, Justice League: Chronicles is a pretty good-looking game. As already mentioned, its cut-scene emulates the style of the show well, and the sprites for the Justice League both look well and animated quite fluidly and the same can be said of the enemies and bosses. The environments are nothing really spectacular, but they do the trick and about the only time that they become difficult to navigate is when you can’t judge whether something can be jumped on because of the overhead perspective. This never really becomes something that will throw you off from where you need to go, however, so it’s a tiny complaint at best.

With its short playtime and fairly easy difficult, I can see why back in 2003 Justice League: Chronicles didn’t get the highest review scores from gaming sites and magazines. If you’re a fan of the Justice League property, you shouldn’t let those things stop you from tracking down a copy of Chronicles though as it does its absolute best at emulating the essence of the show within the confines of a GBA cart. The brawler gameplay isn’t terrible deep, but it’s still fun, and you get to play as heroes like Batman, Green Lantern and Wonder Woman. If you played Injustice for All and passed on its sequel, or never even know about Justice League: Chronicles at all, now’s a good time to take a second look at one of the better games to have the name “Justice League” in the title.