After weeks of will they/won’t they speculation and hope from fans who want the likes of the X-Men and the Fantastic Four to share the screen with the Avengers in a Marvel movie, Disney has officially purchased 21st Century Fox’s film assets to the tune of over $50 billion, ultimately meaning that such things can now be a reality instead of a wishful pipe dream. Whether this is a good thing for the entertainment industry as a whole remains to be seen as it means that Disney will wield a lot of power over what movies/tv series we see and how we see them, it’s easy to take off the tinfoil hat for a second and freak out because OH MY WE CAN HAVE SPIDER-MAN AND THE X-MEN AND A GOOD FANTASTIC FOUR FILM…ahem, excuse me. While we have to wait for the ink to dry on deal and for Marvel Studios plan’s to shift once again as it now has to adapt to being able to produce Marvel’s X-Men and Marvel’s Fantastic Four, you can pass the time playing games where all of Marvel’s legendary IP’s have shared the same space in the meantime 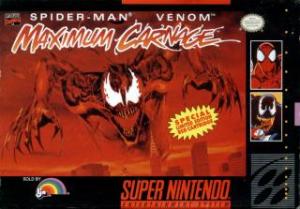 Though it doesn’t feature any well-known X-Men characters, the earliest games that featured Spider-Man, the Avengers, mutant characters and elements of the Fantastic Four are surprisingly enough Spider-Man games. Sega’s Spider-Man: The Video Game for arcades was a four-player brawler that rounded out its roster with Black Cat, Hawkeye and Namor who was later revealed to be a mutant in the comics. Doctor Doom serves as the games final boss in a level that takes place in his home country of Latveria. Firestar, a mutant with the power to produce microwave energy is recruited by Spider-Man and Venom in their battle against Carnage as fire is a weakness of the symbiote race in Spider-Man/Venom: Maximum Carnage. Firestar becomes one of the summonable hero power-ups you can collect in the game, as is Captain America. A level in Maximum Carnage takes place within the Fantastic Four’s home of the Baxter Building when Spider-Man and Venom infiltrate it to obtain the sonic cannon weapon that Reed Richards developed.

Activision’s first Spider-Man games similarly managed to encompass all of Marvel across two games. The Baxter Building is a location in the city skyline that you can reach in Spider-Man (2000) and during one of the cut-scenes, Spider-Man seeks Johnny Storm’s advice when he finds out that Venom has kidnapped his wife, Mary Jane. After Spider-Man stops Doctor Octopus’ plan to make all of New York City symbiotes under his control, he’s met by an Avengers Quinjet piloted by Captain America and Spider-Man, Cap, Daredevil and the Punisher meet for a game of cards during the game’s ending while the Human Torch and Black Cat have a dance party in the background. Spider-Man’s first and only sequel, Spider-Man 2: Enter Electro, has Beast as the character who guides you through the tutorial section in the first stage and challenge rooms take place in the Danger Room wherein Professor X and Rogue make appearances. The Amazing Bag Man, a costume taken from when Spider-Man tried out for the Fantastic Four with a paper bag over his head and a Fantastic Four costume, is an unlockable skin in both games as well. A billboard in Spider-Man (2000) features an advertisement featuring Wolverine and Thor is given credit for saving the day from Doc Ock’s plan on a Daily Bugle newspaper in Enter Electro.

One of the easiest way to play a small series of video games where you can combine Spider-Man, the Avengers,  the X-Men and Fantastic Four under one umbrella is in Activision’s Marvel Ultimate Alliance series which is readily available to download on PS4, Xbox One and PC. Doctor Doom, one of the most famous/infamous villains that Marvel has ever created who has been off the table in the shared Marvel films, is the main villain of the first game in the series and you can make up a team featuring the likes of the X-Men, FF, Spider-Man and the Avengers to take him down. Galactus, another major Fantastic Four related entity who hasn’t even been as much as teased in a film since his cloudy appearance in Fantastic Four: Rise of the Silver Surfer, plays a major part in Doom’s quest for ultimate power as well. Marvel Ultimate Alliance 2 doesn’t see the return of either Doom or Galactus as it loosely adapts the Civil War comic series, but the Fantastic Four return as playable characters along with the X-Men and other major Marvel heavy hitters like Spider-Man, Captain America and Iron Man.

Even before the division of IP’s caused Marvel to reduce the presence of characters from the X-Men and the Fantastic Four in video games, Marvel’s first family interestingly enough never appeared as playable characters in any entry of Capcom’s Vs. Series of fighting games; Including the bloated roster of over fifty characters in Marvel Vs. Capcom 2. Though the Fantastic Four themselves couldn’t be picked for a team of two or three, Doctor Doom could be selected as early as Marvel Super Heroes, but we wouldn’t return until Marvel Vs. Capcom 2 & 3 and it was in chapter three of the Marvel Vs. Capcom franchise that Galactus would serve as the final boss of the game’s arcade mode for the first and only time. Before the Fox/Disney merger, it was announced that the shape-shifting alien race the Skrulls, who have traditionally associated with the Fantastic Four, would be coming to the MCU as the villains in the Captain Marvel film. A specfic member of the Skrull race, the Super Skrull, who is able to use all of the abilities of the Fantastic Four, was not allowed to be used in Marvel’s shared films (until now that is) and he made his debut in Marvel Vs. Capcom 3. Like the Marvel Ultimate Alliance  games, Ultimate Marvel Vs. Capcom 3 is also available on PS4, Xbox One and PC, however you can buy a physical copy on PS4 and Xbox One.

Capcom’s Vs. Series is easily the most well known series of Marvel fighting games, but if you want to be able to battle as someone from every corner of the Marvel Universe, there’s alternatives you can try. The arena brawler/fighting game hybrid from EA that served as a backdoor pilot for a bunch of EA created characters, Marvel Nemesis: Rise of the Imperfects, is one such game. In it you can select from Spider-Man, Iron Man, the Thing, the Human Torch, Wolverine and Doctor Doom, however Doom is exclusive to the PSP handheld port of the game. Ubisoft’s 2012 motion/touch control fighting game, Marvel Avengers: Battle for Earth, based on Brian Micheal Bendis’ Secret Invasion story wherein the Skrulls infiltrate the ranks of Marvel’s heroic community, brands itself as an Avengers game but it also features Spider-Man, the Human Torch, Super Skrull, Magneto, Wolverine and Storm.

One of the longest running series that allowed what Marvel can do in their slate of films now is THQ’s Marvel Super Hero Squad games based on the cartoon of the same name. The third chapter that used THQ’s company destroying UDraw tablet doesn’t feature Spider-Man, but the first two games: Marvel Super Hero Squad and Marvel Super Hero Squad: The Infinity Guantlet, do. All three feature Doctor Doom, the Invisible Woman alongside Wolverine and Avenger characters like Captain America, Hulk and Iron Man. Another family friendly series of games, Sony’s LittleBigPlanet starring the adorable Sackboy/girl, would eventually add Marvel themed costumes that could be bought that would give the franchise’s star the ability to dress up like Spider-Man, Doctor Doom, Wolverine, Captain America and others.

The most well-known game series for players of all ages is TT/WB Games series of Lego titles and the first Lego Marvel game, Lego Marvel Super Heroes, is one of the best of the bunch as well as the best Marvel console game released to date. The plot of the game has an uneasy alliance forming between Thor’s brother Loki and Doctor Doom as they hunt cosmic Lego bricks produced from the board of the Silver Surfer. The campaign of the game and its bonus missions has you going to such places as the Daily Bugle, the X-Mansion, the Baxter Building and Doctor Doom’s home of Latveria. Doom, the X-Men, Spider-Man, the Avengers, the Fantasic Four and villains associated with all are playable throughout the game and their unique skills are necessary to track down all the hidden collectibles in the game’s lovingly created Manhattan open world map. Lego Marvel Super Heroes is available on just about everything that plays video games.

Marvel’s portfolio of free-to-play/mobile titles have been slowly adding characters from the X-Men universe, but characters from the Fantastic Four, even Doctor Doom, are non-existent save one game: Marvel Puzzle Quest. The Human Torch, Wolverine, Spider-Man and the Avengers are characters that you can recruit for your team in the match three puzzle game, and that’s true for the console version of the game, Marvel Puzzle Quest: Dark Reign, as well. Zen Studios’ Marvel catalog of pinball tables don’t fall into the F2P category, but they’re another great home for all of Marvel’s characters and can be played on the go as well either on dedicated handhelds, including most recently the Nintendo Switch. While Marvel’s characters don’t share the same table, you can easily cycle through ones featuring the Fantastic Four, Spider-Man, the Avengers and X-Men.

Today is an historic day and one that fans of Marvel movies have been dreaming about since Marvel started crossing over their movies in 2008 during the incubation of what would become to be known as the Marvel Cinematic Universe. Now finally the mutants of the X-Men, the first family the Fantastic Four, as well as Spider-Man and the Avengers can exist in one shared space in films; Something that we’ve been able to do in one way or another in video games for over two decades now.

One thought on “THE FANTASTIC FOUR, X-MEN, THE AVENGERS AND SPIDER-MAN CAN NOW BE IN THE SAME MOVIE; JUST LIKE THEY COULD IN THESE VIDEO GAMES”