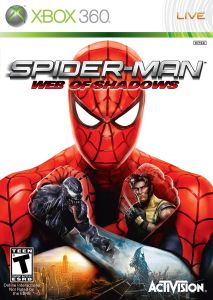 NOTE: THE FOLLOWING IS AN EXCERPT FROM MY BOOK THE WEB OF SPIDER-MAN GAMES: THE AMAZING AND THE (NOT SO) SPECTACULAR

WHAT THEY SAID AT THE TIME:

“Shadows is halfway there, with plenty of cool “Spider-Man” moments. But it never really hits any stride, instead setting into repetition and dragging out its poor third act.” – Nick Suttner, C+, Electronic Gaming Monthly vol. 1 number 235, December 2008

With perhaps the exception of Spider-Man 2: Enter Electro, each consecutive major console Spider-Man video game published by Activision was arguably better than the one that came before it up to a point, and even Enter Electro managed to have a few tricks up its sleeve that Neversoft’s game didn’t have. It wasn’t until the dual release of Spider-Man 3 (2007) and Spider-Man: Friend or Foe within one calendar year in 2007 that Activision found themselves stopping to consider the future trajectory of their Spider-Man video game franchise as both titles were poorly received by critics and fans. This is something that hadn’t really happened since the turn of the millennium after the release of Spider-Man (2000).

To bring a fresh perspective to the franchise, developer Treyarch who had been responsible for every major Spider-Man console game since Spider-Man (2002) partnered with Shaba Games, a studio mostly responsible for extreme sports games for 2008’s Spider-Man: Web of Shadows. Depending on who you ask, this game is as beloved as Treyarch’s Spider-Man 2 (2004), and while it does finally nail things like a combat system that’s enjoyable, a jumbled story and an overall feeling of repetition make Spider-Man: Web of Shadows far better than Spider-Man 3 (2007),  but nowhere near as magical as Treyarch’s first two open-world Spider-Man games.

After a battle with Venom, a part of his alien costume attaches itself to Spider-Man once again granting him the abilities of the alien black suit, which is something that worries the likes of Mary Jane as well as other members of the super powered community like Wolverine and Luke Cage. When Venom starts spawning symbiote pods all over New York after his tussle with Spider-Man it creates an infestation that forces Manhattan to be cut off from the rest of the world for fear of their being a full on symbiote invasion. In order to combat Venom and turn things back to normal, Spider-Man must deal with darkness from all fronts as he’s forced to work with criminals he put away in the past while also struggling with the return of his alien other half.

Spider-Man: Web of Shadows opens strong and establishes its premise well, but the plot meanders so much, especially towards the beginning, that it never really finds any focus. The main villain of the game is Venom, a character who at the time was done to death in Spider-Man’s solo video game outings, but it takes a while for the main threat surrounding the villain to really kick in. Without having the ability to switch to the black suit at will, you would almost forget the game had anything to do with Venom at all as you deal with turf wars in Harlem with Luke Cage and team-up with Black Cat to fight The Kingpin in sub-plots that are far divorced from the main plot involving the symbiote invasion.

A big trend at the time that really gained prominence in 2007 with games like BioShock and Mass Effect that would continue for a few years would be for video game narratives to present players with good and evil choices that would alter plots and endings. Spider-Man: Web of Shadows would get its own take on this with the story and your relationships with certain characters deviating depending on whether you choose the path of good – red-and-blue – or evil – black. For example depending on whether your choices are good or evil, either Moon Knight or The Vulture will come to your aid in a specific scenario. It’s a unique take on the source material for sure and it gives Web of Shadows an identity, but it’s also not a good fit for a character like Spider-Man. Spider-Man is defined by his unwavering responsibility, even when faced with hardship, so to actively make Spider-Man do evil things can be off putting. The branching plot and alternate endings provide an incentive to go and play through Web of Shadows at least twice, and some of the scenes in the dark path are awesomely gruesome, but many who have a certain vision of what Spider-Man is may not even bother venturing down the dark path at all.

Arriving in fall of 2008 and almost a whole year and a half after Treyarch’s Spider-Man 3 (2007), Spider-Man: Web of Shadows has a lot of common with that game in that it once again recreates New York as an open-world playground in which you can freely swing around. Partnering with Shaba Games, mostly known for games like Grind Session, Mat Hoffman’s Pro BMX and even the original PlayStation version of Tony Hawk’s Pro Skater 3, was a wise decision as their experience in the extreme sports genre make Web of Shadows one of the most balanced web-swinging simulators up to that point, marrying the complexity of Spider-Man 2 (2004) and the user-friendliness of Ultimate Spider-Man. There’s still some skill required to get the most out of swinging around, but at the same time you always feel in control. Games like the above mentioned sports titles are meant to make players feel like they’re looking cool as easily as possible, which is certainly the case for Shaba’s take on the Spider-Man license. Web of Shadows is wisely set outside, axing the internal levels that dragged down all of the 3-D Spider-Man games before it, and spider emblems peppered throughout New York captures the fun players had while chasing down orbs in a game like Crackdown as you skip past what you’re supposed to do because of a glow you can see in the distance. 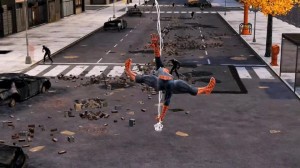 The biggest refinement in this game isn’t in the web-swinging, but the combat, and Web of Shadows is quite possibly the first 3-D Spider-Man game where fighting doesn’t feel like it was designed as an afterthought. It immediately feels good to punch bad guys with even your most basic attacks, but then as the game progresses, you gain access to even more elaborate combos and moves to the point where you’re zipping between enemies in the air, parrying hits on the ground, fighting enemies on the sides of buildings and even riding on them like a skateboard. You can freely switch between the black suit at all times throughout the campaign and it not only lets you track specific types of enemies, but changes up how you fight as well. In the classic red-and-blue, your hits are more fast and precise but the black suit allows you to easily crush crowds of enemies. Each suit has a skill tree and you can buy into whatever style best fits the way you want to play.

As refined as the combat is however, it’s not interesting enough to carry the entire game as all you’re ever really doing is moving from one fight to the next. Main missions have a big emphasis on combat: destroying X number of enemies or defending Y which also entails fighting. The side-missions, activities usually meant to break up the pace in a large open-world game, similarly tend to require you to tirelessly pummel on enemies as early as the opening hours. Luke Cage will teach you a skill, then task you with fighting twenty enemies, then when twenty are defeated, he’ll ask you to fight forty, and instead of starting your enemy counter off at twenty, it will move it all the way back to zero. You’ll get similar missions from the likes of Moon Knight and by that point, you’re just going to want to stick to the script and see the plot through to conclusion. Even with all the variety in how you can fight things between your purchased combos and dual suits you’ll tend to stick to a few reliable moves just to move through encounters as quickly as possible. Web of Shadows’ big hook is its morality system that incentives players to replay it to see its branching paths, but getting through just once can be a test of your patience because of how monotonous the seemingly endless fighting gets. This makes Web of Shadows a disappointing game because it finally moved the needle forward, but just barely, and still failed to introduce anything to do outside of swinging and fighting.

Breaking up the regular fights are encounters with classic Spider-Man villains like Vulture, Electro, and of course, Venom, as well as one fight with Wolverine where your knowledge of Marvel comics comes into play. Spider-Man: Web of Shadows has a lot of great set pieces like having to bounce between flying enemies to reach The Vulture or riding The Rhino during a team-up to break into a jail, but like the bouts with stage enemies, these sections also repeat themselves as you’re expected to fight each boss more or less twice: once in their regular, non-possessed form and then in their more powerful form with a symbiote partner. As interesting as the Vulture encounter is, it’s not that thrilling that you’ll want to want to do it twice.

THE DIFFERENCES IN THE VERSIONS

Across all platforms and PC, Spider-Man: Web of Shadows is the same content wise, with the exception of the Wii game which has the usual graphical downgrades and obligatory motion controls. Like all multiplatform Spider-Man games that have a Wii version, it’s best to avoid that one and go with either the game on the Sony PlayStation 3 or Microsoft Xbox 360.

With its accessible web-swinging mechanics and solid combat system, it’s easy to see why Spider-Man: Web of Shadows has such a dedicated fan following. As well put together as both systems are however, it’s about all you do in Web of Shadows so you really have to love doing both activities if you want to see it through to its conclusion. With a tighter story and more diversity in its activities, Spider-Man: Web of Shadows could have very well been one of the single best Spider-Man games ever crafted. Without either of those things though, it nails only the fisticuffs side of being a superhero while sacrificing the heart that would’ve made it have a lasting impression.