To clarify exactly what type of game players will be investing into with Marvel’s Avengers, the developers at Crystal Dynamics have started a series of events, dubbed “War Table”, that are meant to highlight specific features of the game prior to its September launch. The first was held at the end of June, with the second airing earlier this afternoon. The main subject of today’s War Table was to outline the upcoming beta for Marvel’s Avengers, which is set to roll out throughout the month of August on various platforms starting with the PlayStation 4

The start of the beta will be the Golden Gate bridge mission that was featured in the debut trailer for Marvel’s Avengers at E3 2019, and it is meant to give players a taste of characters like Black Widow, Captain America, Iron Man, Hulk and Thor. This stage will also feature a boss battle showdown with none other than Taskmaster, who you’ll fight as Black Widow. From there, two more single player missions will open up focusing on the duo of Hulk and Ms. Marvel. One missions has the team hunting for Tony Stark’s J.A.R.V.I.S AI while the other will culminate in a brawl with none other than The Abomination.

Upon completion of the single player missions, co-op missions where you can play as up to four players open up. The cast for all of these missions in the beta will be limited to Black Widow, Hulk, Iron Man and Ms. Marvel. These missions will come in a few varieties and will be accessed from a menu in the Helicarrier. HARM missions will take place in a virtual reality environment best likened to those from Marvel Ultimate Alliance 2 or the VR missions from the Metal Gear Solid games. Team work is imperative in these as you can progress deeper depending on well you perform, but resistance becomes tougher as you do so.

War Zone missions are more in-depth, featuring multiple objectives and can be played with a combination of AI and human teammates. A great feature mentioned during the second War Table is that if you choose to play with AI companions, they’ll be made up of the characters that you’ve built. What that means is that if you choose to play as Ms. Marvel and then take Iron Man, Hulk, and Thor with you, they’ll have all the gear, stats and perks that you’ve equipped them with. Something shown during the footage of this was new traversal tools for Ms. Marvel and Black Widow that can best be likened to the grappling hook swinging mechanic from 2009’s Bionic Commando.

Drop Zones are another type of mission you’ll be able to tackle, and these are meant to be quick, easy to get in-and-out of skirmishes with a single objective. Drop Zones are best used for leveling up your team and grinding for better gear according to the War Table’s narrator.

During the beta, players will also have access to the Hulkbuster Iron Man suit. Unlike the traditional Iron Man character who can boost around the map quickly, Hulkbuster is a tank who can break through a group of enemies with ease and fire off a rocket punch as a ranged attack. Hulkbuster will also have a close range rocket punch that’s similar to the “Go to sleep” scene from Marvel’s Avengers: Age of Ultron.

Perhaps the biggest piece of news during this second War Table was the unveiling of the first post-launch character: Hawkeye, who fans have been desperately asking for since he was absent from the public reveal last year. When he arrives in the game, Hawkeye will come with a series of missions that are divorced from the main campaign. The narrator stated that a lot of how they went about designing Hawkeye came from the beloved run from writer Matt Fraction that debuted in 2012. After the conclusion of the War Table, a piece of concept art for an alternate Hawkeye costume that takes inspiration from those comics was shown off. Hawkeye’s in-game emblem was shown next to three others that simply had question marks on them, so it looks like the developers have a plan for at least that many extra characters that we’ll hopefully hear about over the coming months.. 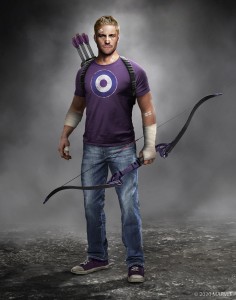 For fans of Fortnite, those who participate in the beta will unlock Hulk and Iron Man gear for that game.

There was a lot to unpack during today’s War Table event for Marvel’s Avengers, and there’s certainly much to get excited over. If you pre-ordered, the beta will be starting up shortly, and you can play the full game when it arrives on PlayStation 4, Xbox One, Google Stadia and PC on September 4th with a next-gen version arriving on PlayStation 5 when that console launches. Those who buy the game on PlayStation 4 will automatically get upgraded to the newer version, so luckily you won’t have to buy the game twice.