“Despite all this spin-off talk, Rosemann isn’t actively overlapping his universe of interconnected games — at least not yet. It’s more like a Spider-Verse. “Each game is in the Marvel universe, but they’re in their own reality, if you will,” he says. “Currently, our plan is to keep each game set in its own Marvel universe.”

These are words taken from an article recently published on Entertainment Weekly about Marvel’s recent success in the video game space. The quote comes from Bill Rosemann, VP and Head of Creative at Marvel Games. Are the claims by Rosemann that the new era of Marvel video games each take place in their own pocket universes true though? Because funnily enough, there’s recent evidence to the contrary.

A game that’s surprisingly absent from EW’s article is Marvel’s Iron Man VR, a strange omission as it’s barely a month old having been released on July 3rd. Like Marvel’s Spider-Man, it too was published by Sony, and while it never had the chance to reach similar numbers as Spidey’s big comeback, it is a PSVR exclusive after all, it managed to become the best-selling PSVR title on the North American PlayStation Store in July. That’s a respectable milestone for a game that’s locked to a platform that as of January, was only in 5 million homes, which are not bad numbers mind you, just a far cry from the over 110 million PlayStation 4’s sold worldwide. For the purposes of proving that at least some of Marvel’s recent games talk to one another, Marvel’s Iron Man VR is an important part of the puzzle.

Much of the plot of 2018’s Marvel’s Spider-Man hinges around a substance called Devil’s Breath. It was created for the purposes of curing a genetic disorder in Norman Osborn’s son, Harry, but what started life as a means to heal eventually turned into something destructive. In an experimental trial, It killed the parents of Martin Li, with that same accident giving Li the abilities that would turn him into Mr. Negative. This also created an irreparable rift between the founders of Oscorp: Norman Osborn and Otto Octavius, a duo once known as “the O’s.” In the third act of Marvel’s Spider-Man, Otto completes his metamorphosis into the villain, Doctor. Octopus, and unleashes a weaponized version of Devil’s Breath on the citizens of New York.

As seen in the video, you can hear Iron Man mention that Norman Osborn is on thin ice after what happened in New York, directly referencing the events of Marvel’s Spider-Man. This is further backed up by a news article you can read on a tablet in Tony’s house with the headline BLUE GENES AT OSCORP – Gene Therapy Under Scrutiny. Appearing on the  Daily Bugle’s website, about the only thing that would be truly irrefutable is if the byline came from Mary Jane. Then there’s a piece of trivia during the loading screens that says that Oscorp was founded by Otto and Norman, reiterating that there has been a recent scandal. 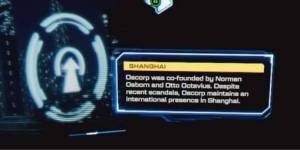 For starters, there’s the matter of Tony Stark/Iron Man’s voice. in Marvel’s Avengers, his vocals are provided by Nolan “Nathan Drake” North while in Marvel’s Iron Man VR Josh “Spectacular Spider-Man” Keaton plays the part. There’s also the matter that when Spider-Man was announced for Marvel’s Avengers, Associate Art Director Jeff Adams specifically mentioned that they’re putting their own stamp on the character, while also incorporating elements of the character’s origins, not once mentioning Insomniac’s design :

“Fans can expect to see Ditko and Romita’s influence in our take on the hero, with nods to other talented artists that have defined the character’s look over his long history.”

It’ll be interesting to see once players get their hands on Marvel’s Avengers early next month if indeed that game does share a connection with the rest of the Marvel’s library. A.I.M, or Advanced Idea Mechanics are the primary antagonists, and the group of super-scientists do exist in the world of Spider-Man as well as Iron Man. When capturing a photo of Avengers tower in Marvel’s Spider-Man, Spider-Man himself does say that the team is rarely in New York as they spend most of their time on the West Coast. This could be a sly nod to the West Coast Avengers comics, but it’s also where Marvel’s Avengers kick off too. What will perhaps cement once and for all the existence of a true shared “Marvel Gaming Universe” is when we finally hear Spider-Man speak once he joins up with the rest of The Avengers: Will it be Yuri Lowenthal, or someone else doing the web-slinger’s wise-cracks?

3 thoughts on “THERE ISN’T A MARVEL GAMING UNIVERSE…OR IS THERE?”