Just like Marvel’s Spider-Man with Hostile Takeover, Marvel’s Avengers received it’s own prologue novel, The Extinction Key, to further build upon that game’s expanded universe. The book deals with the team battling against the resurrected Zodiac, an ancient organization that for centuries has tried to rewrite the world with an ancient, key like artifact. If you’re looking for a way to further interact with the world the developers of Marvel’s Avengers have crafted, it’s worth picking up The Extinction Key, but for those who aren’t big into reading and don’t want their controller pulled from their hands, here are some of the bigger takeaways from it.

In Jason Aaron’s run on The Avengers, he introduced the idea of the team existing millions of years in the past. This too is something that’s setup within the first chapter of The Extinction Key, though perhaps not that far back. A collection of heroes made up of a Sorcerer Supreme, The Black Panther, Ares, Valkyrie and a deity from Konushu – Moon Knight fans will know – are fighting against the first iteration of the Zodiac in the very opening of the book.

THE ORIGIN OF THE AVENGERS

In the comics, as well as the first Avengers film, the team are brought together to battle Thor’s brother Loki. While it doesn’t exactly say what the catalyst was for the incident in Marvel’s Avengers, it was Loki that caused the team to assemble for the first time. 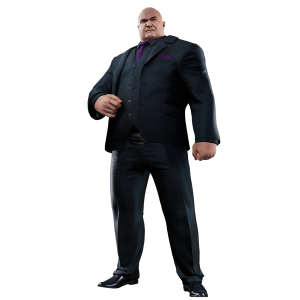 There’s a section where Black Widow goes undercover to infiltrate a black market art deal. This gets thwarted when the Zodiac appears, and when Natasha further investigates her original mark, she finds out he had ties to none other than Wilson Fisk, AKA The Kingpin. While it keeps this point rather vague as to not firmly link it to Marvel’s Spider-Man, Wilson Fisk did have an impressive art collection on display at Rosemann’s in that game, which is where you first played as Mary Jane.

Emil Blonsky is ex-army and a former mercenary looking for a fresh start in America. He finds his big opportunity by becoming the head of security for the A.I.M facility that’s housing the Terrigen Crystals. The facility is attacked by the Zodiac, causing Bruce Banner to change into his alter ego, The Hulk. Blonsky becomes injured in the battle, and feels that his position will get taken away from him because he’s unable to stop super-powered threats. Monica Rappaccini comes to Blonsky with a concoction that is a mixture of Terrigen and cells harvested from Bruce Banner, which she came into possession of when she offered to help cure him, in an effort to make him stronger. Blonsky agrees, but the injection makes him run a high fever instead of enhancing him. After a second attack in which he is unable to defend the A.I.M labs, Blonsky injects more of Monica’s formula into himself, morphing into Abomination.

It doesn’t say how long after the events of Marvel’s Avengers takes place after The Extinction Key, but the closing chapter speaks of building the Terrigen powered helicarrier and the epilogue is Kamala arriving for A-Day. Though an exact time frame cannot be locked down, The Abomination has not been active in this universe for particularly long.

FRANCHISING THE AVENGERS AND CAPTAIN MARVEL

Tony wishes to build a second Avengers head quarters in San Francisco, wanting to dub this new expansion the “West Coast Avengers” which is a nod to the team in the comics. Bruce Banner agrees to the first liaison from the primary team because he wants to be closer to Monica. A big reason for building a second team is the looming fear of extraterrestrial threats. Like in the game, there’s mention of Captain Marvel who is off world fighting and they state they have no way of contacting her.

Doctor Strange plays a large role in The Extinction Key, meeting up with the team fairly early in and sticking around for most of the novel. Doctor Voodoo and Wong are present, but neither stay around for very long.

Like in the films, Doctor Strange uses his magic to see through time. Steve wonders if it’s possible to go back and see what happened to Bucky as he doesn’t believe that he died. Strange informs him that his ability to look into the past is only but a small window and not the decades that Cap was hoping for.

When she arrived for A-Day, Kamala is stated to be 11 years old, meaning during the events of Marvel’s Avengers she is 16.