A year after Turok’s first outing on the original Game Boy, Acclaim launched not only the sequel to Turok: Dinosaur Hunter on the N64, Turok 2: Seeds of Evil, but also a game by the same name on Nintendo’s freshly released Game Boy Color. With a year to make a new game and more powerful hardware with colour capability no less, one would assume that Bits Managers, who produced a very good Turok game there first go around, would release a product that easily trumped their first. However even with new gameplay additions and a touch of colour, Seeds of Evil on the Game Boy is a boring, easy, by the numbers 2-D side-scroller that feels much less like a Turok game than its predecessor.

Turok 2: Seeds of Evil starts the trend that will proceed the rest of the Turok portable games in that they’re the same as their console counterpart in name only. In Turok 2 on the Game Boy, the story revolves around the Amaranthine Accordance, don’t ask, who is trying to bring Binosaurs from the Lost Land to take over planet earth. This forces Joshua Fireseed to collect the light burden to become the new Turok and stop this evil plan. While the Game Boy games seem to disregard the continuity of the mainline console games, the opening stage has you as Joshua collecting the light burden, allowing you to see Binosaurs Bart Vs. The Space Mutants style by hitting the select button. It gives the impression that this may be the first time that Joshua becomes Turok after the mantle changed over from Tal’Set in the first game, making this the prequel to the N64 sequel. That’s probably more thought than what was put into this story though, as I probably lost most people at the villains of this tale being called the “Amaranthine Accordance”.

When you eventually become a full-fledge Turok, you’ll be able to tell which mimes are dinosaur people.

This game feels less like a sequel and more like an expansion to Battle of the Binosaurs as very little has been changed or improved upon: The controls are still tight and every action is performed exactly the same as it was before. But while the controls are the same, the overall game design is much worse than the first Turok handheld outing. The levels are incredibly basic and straight forward, involving no key collection or exploration. There are some glimpses of design elements carried over from BOTB, like having to explore caves for the right switch to hit to open an exit portal, but these tend to be the rare exceptions though. Most of the time you’re just moving left to right until you reach a stages end which makes the game far less challenging, engaging and pretty short as well. I casually picked this up after beating the first Turok Game Boy game and completed most of it in about an hour.

An area that wasn’t fixed was the difficult platforming. Despite a deemphasis on exploring, there’s still frequent instances where you’ll either die making a jump or perishing because of fall damage while trying to progress. The instances and set backs are less punishing that in Battle of the Binosaurs, but the fact that they’re still present is very aggravating.

In place of exploring and key collecting, developer Bits Managers threw in some new gameplay diversions that never really amount to anything. The first you’ll come across early on is a self-scrolling stage where you’re riding on the back of a velociraptor. Now, that sentence certainly sounds pretty amazing, but unfortunately it isn’t. Completing these levels usually involves dodging dinosaurs dropping rocks on you while jumping over chasms while the stage scrolls right. As you can’t move left though to say, build up momentum, you’re normally just standing stationary waiting for the level to reveal itself so you can get a running start and not die.

Outside of that you’ll encounter multiple stages where your either in a boat going upstream dodging obstacles or running away from an enemy while also avoiding objects coming towards you. Both of these tend to go on to long, and are not really that fun. The best new addition are a few select stages where you ride on the back of a pterodactyl when the game turns into a horizontal 2-D shooter. Even these stages though lack a lot in the way of difficulty and are never really that exciting, but compared to the other three new gameplay variations, it easily controls the best and is welcome as opposed to being intrusive. 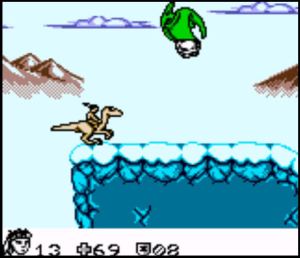 Looks awesome, sure, but pictures can be deceiving.

This game was of the first to take advantage of the Game Boy Color, but as it is a game that was also playable on every other Game Boy at the time, it doesn’t really benefit graphically that much. Having something other than black and white to look at is great, but overall the environments feel just as barren despite the colour upgrade. There’s never more than a few different shades on display at any given time and there’s never that much interesting detail.

After completing Turok: Battle of the Binosaurs I was really looking forward to seeing how the series would evolve as it moved from the original Game Boy to the Color, however Seeds of Evil despite being in colour is a far inferior product overall. I appreciate that Bit Managers tried to add in some variety via dinosaur mounts and alternate perspectives, but none of the new additions are as fun as exploring the labyrinths found in Battle of the Binosaurs. Overall Turok 2: Seeds of Evil on the Game Boy Color isn’t a bad game, it’s just one that’s pretty average and not required playing.