I want to preface this piece very early on by saying I love the character of Miles Morales: In either collected edition or trade, I have every issue starring the character as written by Brian Micheal Bendis; I have multiple Miles Morales Spider-Man action figures and even a hoodie and t-shirt modeled after Miles’ now iconic Spider-Man outfit. As someone who very much loves this recent take on the Spider-Man character, I feel that pushing the character next to his more well-known counterpart, the original Spider-Man, Peter Parker, is doing the character a huge disservice and is more harmful in building Miles’ main stream appeal. This is something that could also possibly be true with Insomniac’s highly anticipated Marvel’s Spider-Man.

Me, three years ago, looking awkward as always in a picture rocking my Miles Morales Spider-Man shirt.

To get into why this is the case, I first have to explain Miles Morales’ simple, yet kind of complicated origin and for that, we have to take a trip in the way back machine to the start of this century. To revitalize popular properties like Spider-Man and the X-Men after struggling with financial problems in the late 90’s, Marvel created a new imprint: Ultimate, or Ultimate Comics. Books in this imprint took place in their own universe separate from the mainstream Marvel Universe whose stories date all the way back to the 1960’s and were modern takes on classic characters designed to bring in new and lapsed readers who felt overwhelmed by issues numbered in the several hundreds. One of the earliest hits in this line was Ultimate Spider-Man, written by Brian Micheal Bendis, who essentially rewrote the Spider-Man myth for the new millennium. Peter Parker was still bitten by a spider that gave him super powers, but instead of being radioactive, it was tampered with genetically, and Peter’s high school surroundings were more relatable to the youth of the era, with kids hanging out at the mall and referencing things from the era like MTV. The influence of Ultimate Spider-Man became so great that it was felt in even 2002’s Spider-Man by Sam Raimi and still even today in the more recent Spider-Man: Homecoming.

Even though the Ultimate Universe was free of the decades of continuity that many saw as a massive hurdle to get into reading Marvel’s normal line of comics, it soon started to suffer from the same problems that comics do. Characters died, even stayed dead in a lot of cases and not just in low-level characters but the likes of Magneto and Wolverine, issues got up into the 100’s in the case of Ultimate Spider-Man and it became just as daunting to get into the Ultimate Universe as it was the regular Marvel Universe. To reinvigorate the line, and in particular Spider-Man, Brian Micheal Bendis made a bold and controversial decision in 2011: He killed off Peter Parker and replaced him with a new Spider-Man, Miles Morales.

Miles Morales’ origin was not unlike Peter Parker’s: A genetically altered spider from Oscorp found its way to Miles, he was bitten and he too got spider themed powers but with a few twists like the ability to camouflage into his environment and a venom blast Miles could use to deliver a painful shock to enemies. When Peter Parker was bitten by a spider, he didn’t immediately throw on a costume and start fighting crime. It wasn’t until he let a random burglar get away with a crime who would then go on to take the life of his Uncle Ben that he learned the lesson that with great power, must also come great responsibility. In Miles’ case, Peter Parker is his Uncle Ben. Miles didn’t want to be super hero either, just a regular teenager who went to school, but when he saw Peter Parker die at the hands of the Ultimate Universe’s Green Goblin knowing that if he had perhaps done something about it, Peter may have lived, he knew he couldn’t ignore the gifts that were  bestowed upon him, and thus, as they say, a hero was born. 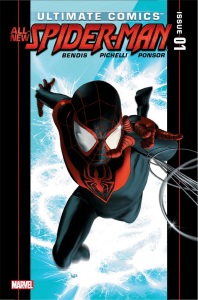 Miles Morales was initially met with a lot of backlash by purists who were outraged that Peter Parker was being replaced, but it wasn’t long that people were saying “Peter who?” and came to both adopt and love Miles Morales as THE Spider-Man of the Ultimate Universe. The issue though was that while people loved Miles, the Ultimate Universe was being kept afloat solely by Brian Micheal Bendis’ Spider-Man books, and there was a feeling that the universe simply didn’t matter anymore as it wasn’t in the proper Marvel Universe so why bother to get invested? Marvel would eventually fix this problem, but in my opinion, it has done more harm than good to the characters of Miles Morales.

Without getting into the plot of the confusing mega event that Marvel put out in 2015, Secret Wars, at the end of the story, the Ultimate Universe was killed and its main star, Miles Morales, was brought into the Marvel Universe that “mattered”. But in bringing Miles into the universe that “mattered”, he suddenly didn’t. In the Ultimate Universe, Miles was THE Spider-Man, but in Marvel’s regular continuity, he was just one of many, many spider-powered characters: Peter Parker, Jessica “Spider-Woman” Drew, Cindy “Silk” Moon, Ben “The Scarlet Spider” Reilly, and a few others as well, including Venom if you want to (I do). It could be that Brian Micheal Bendis’ is running out of steam after writing Spider-Man in one form or another for seventeen years (he recently announced a move to DC) but Miles hasn’t been quite as a compelling character since after the events of Secret Wars. Miles’ weight to perform as Spider-Man came from a desire to live up to Peter Parker, but that motivation is gone now that he can go and visit Peter Parker whenever he wants to. Marvel’s latest rebranding initiative, Marvel Legacy, has mini origin stories for a character in the back of their debut Legacy issue. In the ongoing book starring Miles, his origin doesn’t even state that he took up the mantle after Peter died, just that when a hero fell, he stepped up. I get that this is meant to make the character easier to understand for new readers, but Miles time in the Ultimate Universe shouldn’t be forgotten as it’s what made this character so beloved in the first place.

This past summer’s E3 during the Sony press conference, a new trailer for the Insomniac developed and Sony published Marvel’s Spider-Man concluded with the reveal that Miles Morales exists in the universe that Insomniac is crafting for their take on Spider-Man and his role within this universe was further showcased during a more recent trailer for the game at Paris Games Week late last month. While many are excited that it could look like we’ll have a second playable Spider-Man, there’s a strong case to be made that Miles should be out of a suit for at least one, if not two sequels. This not only comes from how the character has been handled in comics, but in other forms of media as well.

The Disney XD Ultimate Spider-Man animated series, very loosely based on the comic of the same name, did a story where Peter Parker journeyed to various worlds and met other Spider-People, and one of these worlds very much resembled the one that Brian Micheal Bendis had created for his Ultimate Spider-Man book. In it Peter Parker had died, and Miles had risen to take his place and the episode concluded with Peter giving his blessing to Miles to continue being Spider-Man, something which also happened in the 2012 mini-series Spider-Men, also written by Brian Micheal Bendis where Peter gets warped to the Ultimate Universe. In the following season of the show, Miles was brought into the regular cast, just like in Secret Wars, and the transition was awkward to say the least. In the show, Peter and Miles humorously suffered trouble while fighting crime with other heroes when someone used the name “Spider-Man” and both heroes reacted. This led to Miles getting the title “Kid Arachnid” on both the show and the merchandise inspired by the show, which thankfully is exclusive to that take on Spider-Man.

Ultimate Spider-Man ended in January of this year, and in its place a new animated series has arisen in its place, also called Marvel’s Spider-Man. Miles was introduced very early into this show and he’s already become Spider-Man with only fourteen episodes having been aired of the series to date. Marvel’s Spider-Man hasn’t, and hopefully won’t, reuse the “Kid Arachnid” name, but it still has rushed Miles into a costume with little for him to do thus far; He hasn’t actually been seen in the past four episodes. Marvel and Disney both know that Miles Morales is a popular character, and more importantly that its very important to have a Spider-Man of both African and Hispanic heritage in today’s society, but neither seem to know how to make the character work alongside his more famous, original counterpart and I hope that Insomniac doesn’t rush to get Miles into a costume quickly. If they want to emulate one of his powers, the ability to blend into the environment, they can always use the stealth suit that Dan Slott invented for his run on Spider-Man.

Next year Sony is set to release a feature length, animated Spider-Man film in theaters that will put Miles Morales in the role of Spider-Man over Peter Parker, and this will be the, no pun intended, “ultimate” test on how well Miles plays to a wide audience. The name Spider-Man will carry weight for sure, but how will audiences who are not intimately familiar with what’s going on in the pages of Marvel Comics feel about someone else behind the mask? Miles Morales is a fantastic character with a simple, yet at the same time complicated, back story that creators have had trouble coming to terms with in blending him in with what most people know as Spider-Man, Peter Parker. Insomniac’s Marvel’s Spider-Man is a ways away, and hopefully as the game gets closer to release we’ll know even more about Miles place in this universe. Fingers crossed that Insomniac finds a way for Miles to exist alongside Peter should he don a costume in the first game to avoid the issues that others in both comics and other forms of media have had.