NOTE: Played on a PlayStation 4 (Slim) from a copy purchased by the author.

“I made it for all the right reasons…now this.” – Tony Stark

The Avengers have existed for over half a century, but their star has never burned brighter than in the last decade or so thanks to the shared Marvel Cinematic Universe. Ever since the team assembled on the big screen in 2012, it’s been puzzling to many why no one was capitalizing on that success in the video game space. TT Games has done a fair share of of the heavy lifting with their terrific LEGO outings, as have many mobile developers, but none were the true Avengers experience players were longing for.

In early 2017, publisher Square Enix announced that along with their development partners Crystal Dynamics and Eidos-Montréal they would be taking on the daunting task of crafting an Avengers console game, officially titled Marvel’s Avengers upon its unveiling in 2019. After a delay from its original May release date, Marvel’s Avengers has finally arrived on most every major platform. Though not without its standout moments, in particular its primary protagonist, Marvel’s Avengers is among the biggest disappointments  in comic book video games in recent memory due to its poor performance and many bugs, but mostly its obvious desire to funnel money from its userbase while keeping them trapped on a monotonous treadmill.

An event that was meant to be a celebration of all things Avengers turns into a catastrophe that would come to be known as A-Day. After an experimental fuel source known as Terrigan that was meant to power next-generation helicarriers explodes over San Francisco, countless lives are lost – among them Captain America – and a mist beings to emanate from ground zero that beings to change people into super-powered beings referred to as Inhumans. The Avengers are officially disbanded following this tragedy, and in their absence rises A.I.M, or Advanced Idea Mechanics, who promises to both police the world and develop a cure for those infected during A-Day. After a young girl named Kamala Khan, who was present during A-Day and is an Inhuman herself, discovers that A.I.M may not be who they seem, she sets out to reform The Avengers and put a stop to A.I.M’s plans. 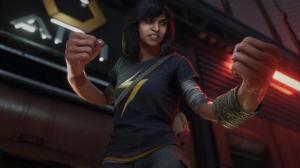 Kamala Khan, voiced wonderfully by Sandra Saad, is Marvel’s Avengers shining point. Not only is it great to see a female, Pakistani-American Muslim essentially headlining a major video game, her fangirlish love for superheroes makes her a brilliant audience insert character into this world. Regardless of age, gender, religion or race, anyone holding the controller is just as excited to be around these larger than life characters as Kamala, and most of the heart of the story comes from her genuinely touching moments with her family, and meeting those who would make up the one that she graduates into over the course of the story.

It’s when events shift away from Kamala that things start to get less interesting, which is quite bizarre in a game titled Marvel’s Avengers. Major players from the team are absent for large portions of the single player campaign, and those that have a lot of screen time are nowhere near as engaging as Kamala. Nolan North does little as Tony Stark than crack wise and is not given nearly as much work with as Iron Man than Josh Keaton did in Marvel’s Iron Man VR. Troy Baker does a serviceable job playing Bruce Banner as someone who’s trying to keep their literal inner monster bottled up, but he also spends much time whispering his lines.

Marvel’s Avengers is primarily a third-person action game, and it’s for the most part an enjoyable one. You’re sure to find your favorite among the base cast of six from the quick and nimble Steve Rogers and Black Widow to heavy hitters like Thor and Hulk. Like in most games of this type, each hero has the requisite skill trees to move through as you gather experience and levels from battling the forces of A.I.M. The problem facing Marvel’s Avengers though is that Square Enix wants you to engage with these mechanics for presumably years to come. As good as it feels to fight as these heroes and make them truly sing with new abilities as well as combos, the game that houses them just can’t hold your attention for that long.

There are set-pieces in Marvel’s Avengers that truly stand out where you stare in awe at what’s presented before you on screen. But the high points tend to not come from the battle arenas, but early platforming sections where you navigate the world as Kamala, creative director Shaun Escayg did work for Naughty Dog after all, but they feel like they’re from another game, or at least an early version of what this title perhaps set out to be. The same goes for the late content that presents you with exciting new traversal mechanics and levels that accommodate them. It makes you wonder why they even bothered to do this because that’s not what this game is at all.

A new genre has arose in this generation: Live-service or Games as a Service. This refers to titles that are meant to keep players continuously engaging within the same ecosystem through rewards like loot that is constantly flowing in and out. Companies like Bungie and Ubisoft have found success within this model, but it’s also spelled disaster for games that have tried to copy this model unsuccessfully. At least from what Marvel’s Avengers is presenting up front, it’s unclear just how much success it will have within the space because the multiplayer missions masked as single player levels already start to become stale by the time the ten or so hour campaign wraps up.

Multiplayer missions come in a couple of flavors, but they always have you navigating the few exterior backdrops or or A.I.M labs completing one of a handful of objectives: holding capture the flag style points; hitting switches to unlock doors or destroying something. Even when the game tries to add some extra context, often with the intention of crafting a mission to develop one of the cast members, be prepared to tackle the same A.I.M robots and goons over and over. Sometimes you come up against walking battle suits or gigantic robots, but even these become tiresome after not too long, especially when you’re in clearly designated multiplayer maps by yourself and presented with an unfair amount of enemies. There’s also the case of missions you shouldn’t even bother trying because you’re numbers aren’t high enough. This is to incentive you to keep powering through, but this starts to happen almost right away while you’re struggling to level up.

All that’s left then is the endless pursuit of loot, something that’s suppose to make the grind seem less so, but it’s just a mess. It’s very easy to enter areas in this game where there’s a lot in them, but absolutely nothing at the exact same time. Empty cities, forests, and canyons are crammed with floating platforms, buildings and enemies, but nothing for the player to really do than fight and run across an empty space in search of a treasure chest in hopes of acquiring a new rib cage for Hulk. There’s supposedly a soundtrack playing in the background to help keep you awake, but it barely registers with you and there’s no central theme like The Avengers films, or even Marvel’s Spider-Man. It’s funny then that it’s being pressed and sold on vinyl.

Marvel’s Avengers is packed with gear, resources, stores, and tedious, slow to navigate menus filled with confusing meters and numbers. After not long, the smoldering fire of tracking down a question mark on your map fizzles out because you know it’s either just filled with junk or something that’s does little more than make a number go higher. You can play Marvel’s Avengers without ever purchasing anything more than the base game, but you can tell just how desperately it wants more from you for the promise of better gear or alternate costumes. Coming off of both Marvel’s Spider-Man and Iron Man VR, both games where there was plenty to unlock and enjoyable to do so, it can feel downright sickening how sleazy it feels.

Not helping matters much is that Marvel’s Avengers is riddled with technical problems, at least when played on standard PlayStation 4 hardware. This issues of course will get patched overtime, but as far as first impressions go, this game doesn’t give a good one. During cut-scenes textures would not load correctly, incorrect sub-titles appear on screen, audio drops out, and when things get too hectic on screen, the frame rate plunges to hilariously low numbers. More than once the game would hard lock during a menu, forcing you to reset it:

Twice in a row now this has happened to me. Have had to close the application down. pic.twitter.com/KPKcHzWZAk

As of this writing, there are players who also cannot access the single player mode without first getting invited into a cooperative session because of a glitch that causes the game to load indefinitely from the main menu:

I’m saving all of my Avengers talk for my review. I’ve got two pages of notes, many of which are just bugs like for instance not loading into the main game from the starting menu. This has happened twice.

“The more money I spend, the happier you are.” – Kamala Khan

From some of the story beats and levels that feel like they were constructed for a different style of game, it’s clear that Marvel’s Avengers started out as one thing but somewhere along the way was perverted into something different. There are enjoyable underlying mechanics here and repetitive missions can at least be somewhat entertaining when chatting with friends, but this game should be more than a mindless distraction that’s on in the background. A game such as Marvel’s Avengers has the potential to evolve and change post its initial launch, but it’s going to take more than the Earth’s Mightiest Heroes to keep players coming back if this is all they’re being presented with.

Marvel’s Avengers is available now for PlayStation 4, Xbox One, PC and Google Stadia. Next generation versions will follow.